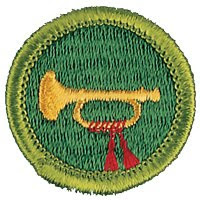 Day is done gone the sun, …… hearing Taps takes me back to Girl Scout camp, Camp Laurel in Lebanon, Ct and my introduction to Taps as an ending to a day and a final night at camp when natural log boats were set out on the lake each bearing a candle and a wish, we watched them float away as Taps played. I was nine at the time, now in my minds eye I can see it like yesterday. www.gsofct.org/particpate/camp/laurel-r.php
I recently read in the Ct. Boy Scout online newsletter that the Bugle Merit Badge was reinstated. The badge had been discontinued but an outpouring of comment from present and past Scouts in support of the Bugle Badge and in honor of the 100 years of Boy Scouting, saved the ill fated badge, it should be so. Taps and bugles are synonymous with our respect. The badge reinstated will hopefully urge more young people to learn to play bugle and share Taps at Scout and other functions. What a great honor for our scouts to play at Memorial Day, and other events even for lights out at camp!
Taps was born of the myriad of Bugle Calls used in the American Civil War and fitting with the 150 th anniversary of that war coming in 2011 for us to re-devote ourselves to some of the positive things that came from that bloody conflict. Around the world the 24 haunting notes of Taps are recognized as a melody of farewell and honor. It was the television coverage of the funeral for President John F. Kennedy that brought Taps to the world. I remember watching the funeral and seeing the bugler, and the caisson, and the Cavalry horse, riderless with the boots in the stirrups reversed, the symbol of a fallen soldier.
It is Military Funerals and Memorial Day functions that see the playing of Taps is still a daily event in our Nation. Unfortunately there are not enough Bugler’s to play all the military funerals. How sad to serve your Nation and on the final day there is nothing more than the whir of a tape recorder playing Taps to bid a soldier his or her final farewell. An organization has sprung from that need which helps supply buglers to services. As a volunteer effort they are in need of more to help as well as resources, and they need the word spread about the volunteers who will provide that final call. Be sure to check out the work of operation Taps at www.operationtaps.org
“Boogie Woogie Bugle Boy of Company B” made playing Taps a rage for a time. As songs leave the top 40 play list the impact they make grows dim, until they surface again. Call a radio station and request it on holidays or in memory of a Fallen Soldier! The military still use bugle calls as a way to keep order in camp and signal changes in the routine. In the Civil War it was used for many events of the day, the Cavalry had a few calls of their own added to the Infantry. , the Call to Boots and Saddles, To Horse and Charge being the most common.
www.15thnewyorkcavalry.org/bugle_calls.htm
Pick up your old trumpet, pick up an old bugle and learn the call to Safely Rest, play TAPS!
www.youtube.com/watch?v=Nhtr5J00ntA&feature=related
http://bands.army.mil/music/bugle/