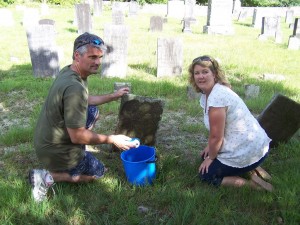 The vault released so many vital data bits our heads were swimming with names and dates. For me at least there was the understanding of the sections of town the boundaries and the places mentioned. Laura was baffled by the geography of the search and relied on my clarifications for what was nearby etc. From a deed in 1820’s I was able to tell where the farm was simply by the description. Not that many to choose from so we were able to add it to the list of places to go see. In the end of the day with minutes ticking to closing and with a ream of copies of materials she still did not have hard evidence that Daniel was the son of Ebenezer.
The Town Hall closes at 12 on Friday’s and we packed up and left. Only hours left of Laura’s stay in Ct. and so much to see. We met up with the family and I climbed in their car for an auto tour of their family heritage. We went around our farm and the University. We drove down to the village of Atwoodville and I pointed out the trail that leads to the ruins of early Silk Mills and industry whose birth was in the town of Mansfield. On this day with the 3 children in the car it wasn’t the mills that were the intrigue it was the swimming hole in the Mount Hope River. Here for 200 years family members have escaped the dog days of summer with a cooling dip. Great Grammy used to tell of her brothers hoeing corn and shedding layers as they ran toward the river and the giant rocks, the leap and the refreshing water. Scampering over the rocks the children were soon in and taking turns sitting where the small water fall poured over their heads making a umbrella shaped splash about them. The giggles echo off the rocks and the time goes to fast.
Back on the road we have one last stop, the Atwoodville Cemetery. The children cool from a swim are happy to stay in the car with a movie the eldest , Laura’s son comes to join the search for the missing link. We walk up and down the rows of markers. Laura’s voice calls out with a catch, I found him. We all gather in front of a stone, it is the father Ebenezer Baldwin next to his a stone for his wife and the dates coincide. Daniel is buried in Wisconsin but it was said he and his wife lost 4 children in one week before they moved west. The children should be here. But there was no place with four small markers.I had sent a picture of one stone but it was not clear enough to read in the on line image. If we found the children and they said they were Daniel’s it would indeed be proof. The stones next to Ebenezer and his wife are small and crusted thick with lichen and moss. From 1824 the plant life has had a fair chance to take hold. In the car I have a bucket, water and scrub brush for just this moment. Soon we are washing away the years of growth and there is the missing link. Four little children who perished in a plague buried in three graves with markers with their names and saying they were indeed the children of Daniel and his wife Serviah. Here they are buried right beside the grandparents and there is proof Ebenezer, Daniel and the children raised here and in Wisconsin are one family, ours! 186 years later. they are remembered and for us show the way, a link to the Mayflower and a history lesson these children will never forget.

The phone call came a couple months ago from Wisconsin. The caller, Laura found my name on the town website listed as the Cemetery Sexton and she was searching for records. On a long quest to follow her family genealogy she soon discovered the Mayflower Society and how to trace back and show your roots… END_OF_DOCUMENT_TOKEN_TO_BE_REPLACED