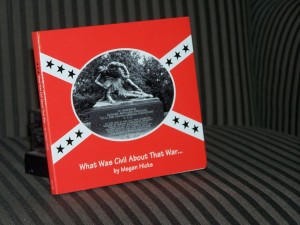 What Was Civil About That War… a CD by Storyteller Megan Hicks, 2004 stories (un)folding
isbn: 8 2534646922 5 Stories ( Un) Folding PO Box 7994 Fredericksburg, Va 22404
http://www.meganhicks.com/
The lilting tune “Gary Owen” belies the eerily haunting tale of Civil War events at the battlefield that permanently transformed the sleepy town of Frederiscksburg, Virginia into battle mayhem and subsequently a National Battlefield Park. The courage of ” The Angel of Marye’s Heights”, a soldier long remembered after his days of service to humanity while in the Army of the Confederacy is shared in story on this poignant CD. Sgt. Richard Kirkland survived the siege at Fredericksburg and went on to serve in a later battle and die on the field of battle a young man whose promise was cut short, like so many others. His tale of courage and that of resident Martha Stevens and the soldiers of the indomitable Irish Brigade come forth in a personal telling that takes a dry lesson of history into living reality.
www.militaryheritage.com/sound.htm hear Gary Owen at this site
Share this post!