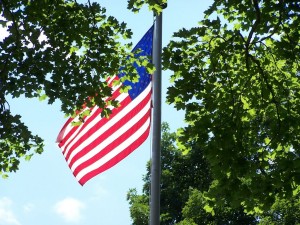 Imagine now if those fireworks we stay up late to watch were really the ‘Bombs bursting in air”. Can we stop a minute and be thankful that the ooo’s and ahhh’s are the response, not the screams as people flee the whistle of an incoming threat. It is a rare day in America when we have had to take cover.
Imagine if you will as the grill flares up and the smell of juicy burgers and steaks wafts across the neighborhood, the fires at Valley Forge in winter when General Washington was running out of food to feed his freedom army. Each day a crew went foraging further afield to secure firewood to keep frost bite away. One pair of boots to six men, taking shifts to wear them.
Imagine for just a minute the women as they parade arm in arm through the street for a right to vote, just to have a chance to have her voice counted. It is hard to imagine when so few turn out at the polls to vote for the local representatives. Where were the other 10,000 voters the last vote, they stayed home and will expect to have their complaints heard later.
Imagine a mother with 6 sons gone off to the Revolution. 6 Hale boys went, and son Nathan was hung in New York where people go about their day shopping and doing business now. They don’t even realize they may walk past the spot he said his famous words. ” I only regret that I have but one life to lose for my country!” His body was never recovered but a few of his personal items were returned to his family. A small measure of gratitude, but one that lasted, the items still are in the family home in Coventry Ct. they remember!
Imagine if you would hearing a voice call from the battlefield in the Civil War. Wounded and under fire he lay calling for help for hours but it is constantly under the barrage of attack. Finally an officer under cover of darkness crawls out to the dieing voice, it is his son!
Imagine if you will a submarine in New London Ct. slipping away from the dock and slowly dropping down into the cool depths as the very pregnant woman on the docks waves goodbye until not even a ripple remains. Finally upon its return to home port, she is there once more on the dock and her son walks out to greet the father he has never met.
We have so much to be thankful for and to celebrate this 4th of July. Every 4th of July is special, but the freedom we enjoy comes with the highest price tag. So as we venture into the day with parades, music, picnics and of course fireworks, take a moment and imagine how it might be, or may have been. Celebrate our Independance Day with all the American traditions. We are the land of the Free and the home of the brave! Happy 4th of July America!
Share this post!

Print
← Hear The Whistle Blow 500 Miles
The 4th in Gettysburg →

One Response to 4th of July